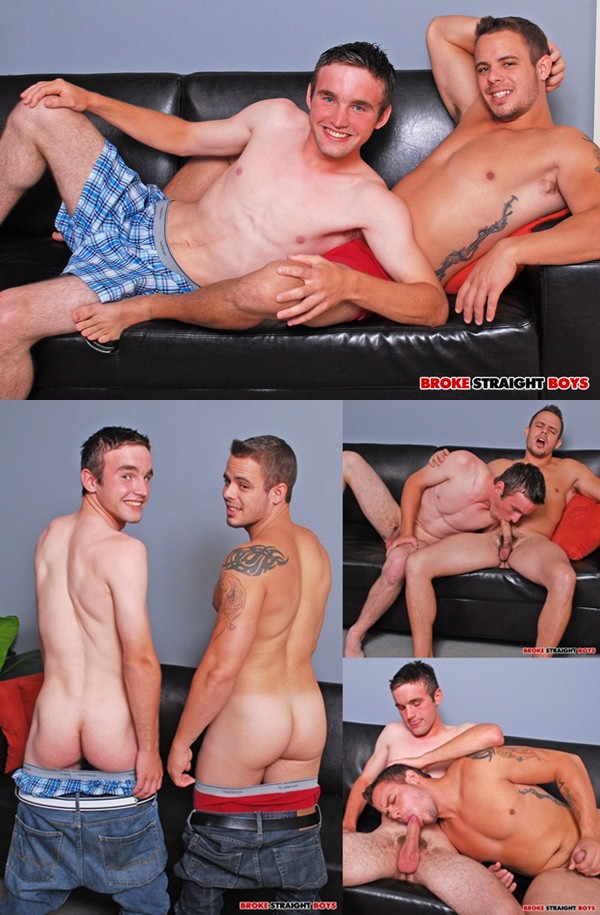 we would each get to spend a weekend with Denver Grand. Good trouble seems to find the stud wherever he goes. The cameraman and Trey Evans went to bed early the night before this shoot, and Denver went out with Spencer and a number of other people. Don’t want to spoil Denver’s rendition, but pee was involved. You have to hang out with a guy who tells a urine tale. Today Denver and Trey are going to flip flop. Trey has never been a talker, and he says even less around Denver; however, whenever he looks in Denver’s directions his grin is from ear to ear. Wouldn’t you do the same if you were close to DG?…

They get on the couch, naked, and Trey begins the playtime. “See what you got new guy,” Denver says. Trey must have the right stuff because Denver’s face gets so cute with Trey in his lap. “Not bad for being new at this,” Denver observes. Trey’s own cock is standing right out out and Denver strokes it. However, he’s more into what’s happening in his lap. “Show me what you got,” Denver announces, as he pushes the boy’s head down.

Trey chokes, but keeps sucking like a champ. He hasn’t learned how to deep throat yet, but Denver is never one to complain about good effort. Denver pulls the lad up and returns the favor. He shows Trey how to deep throat, and the proper use of spit and tongue. The lesson is appreciated. “Oh, yeah. Feels so good,” Trey says. Trey even gets into dirty talking when his balls are licked. “That’s fucking hot,” he murmurs.

“Oh, shit. Feels so good,” Trey moans. Trey reaches for the condoms and asks Denver if he’s ready to get impaled. There’s some hesitation, but when is Mr. Grand not ready? He gets on his hands and knees, and Trey saddles up to the hole. In one motion he’s in and Denver is biting the pillow. “You like that tight ass,” Denver asks. “Oh, yeah. It’s fucking amazing,” Trey replies. He is going in as far as possible, making sure his bottom whimpers.

“Oh, yeah. Take that cock,” Trey orders. Trey’s stroking is short and slow. It’s like he doesn’t want to leave that hot boy pussy. “Fuck that little asshole,” Denver demands. Trey does but you can’t give and not receive. Soon enough it’s Denver’s chance to loosen Trey’s ass ring. Our skinny boy gets on his back and is stuffed with Denver’s meat. Trey’s face is priceless. He’s shocked by it all.