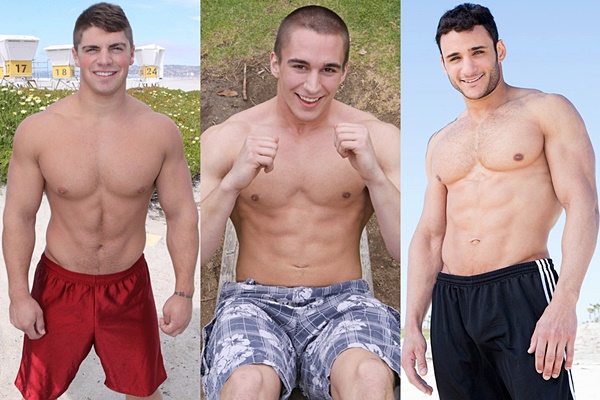 The rumor about Seancody has been spread all over the net recently. It’s time for me to give you some exclusive information about what exactly happened, and also about Seancody’s new plans and upcoming hot scenes in Summer.

I had a conversation with one of managers from Seancody a few days ago. I got some firsthand inside information that you can not find from any other place. I am sure it will help answer lots of questions from fans.

The release schedule has been changed to two scenes per week, at 12:00AM (EST) on Tuesday and Thurday. The Seancody director wants to focus on finding better talent and quality scenes instead of using filler on the site.

We all know “Top to Bottom” is a successful series at Men.com. After Mindgeek bought Seancody, they also want to create some potential big series which will be developed every month. (I will be so happy if Seancody could also have its own “Top to Bottom” series in which we could see those long time top only hot straight guys get fucked. 😀 )

A lot of fans complain about many hot solo models never coming back. The truth is: A lot of models are simply strapped for cash. They shoot solo scene to get out of debt quickly, and then never come back.

After the solo, Seancody always proposes mutliple scenes to the models. But it’s the model who has the right to decide whether to shoot more scenes or not. It’s not fair to say they haven’t been back because Seancody didn’t try. Actually Seancody always tries to have progression with everyone after they shoot the solo scene.

Besides from creating hot new scenes, Seancody also wants to track down fans-favorite models from the past. The manager asked me for some recommendations. I don’t have time to go through all the models at that time, so I give him 12 hot guys that I want see them back again – Alan, Daniel, Dermott, Harrison, Jed, Kennan, Marshall, Neil, Parker, Pavel, Rocco, Victor.

If you want to see your favorite models coming back, leave a reply and I can forward it to Seancody. Maybe you will see them back on camera some day. 😀 Right now, Seancody is pushing a few hot models to come back. As far as I know, one of guys is pretty hot. His name starts with H (Sorry, I am not allowed to disclose his full name).

[Updated on May 12th, 2015] I just had a small talk with the manager of Seancody. Now I have some good news to share with you. The release schedule is changed to three scenes per week, on Thursday, Saturday and Monday. We have 2 hardcore scenes and 1 solo, with special features every couple months.

And one of managers from Seancody also read this post. So leave a reply and tell him what you guys want to see. I will update this post as long as I get any news. Stay tuned!

[Updated on May 15th, 2015] For the release schedule: Solo scene will be released on Monday, and two sex scenes will be on Thurday and Saturday. And for fans-favorite models such as Abe, Stu and Jess, Seancody keeps working on to get them back, but it also depends on those models.

[Updated on June 19th, 2015] We have another hot solo model come back for his first sex scene tonight. His name starts with “G” and his solo debut was shot in last October. He barebacks Tanner in his hardcore debut. Wait a few more hours and you will know. 😀

[Updated on July 23th, 2015] There are tons of request from fans asking Abe to come back. Finally, I got a chance to chat with the rep manager of Seancody about Abe. Here is his reply: “I seem to remember the director mentioning Abe to me last week. we were just chatting about Abe. But like I said don’t quote me right yet. I don’t know if it was confirmed or Abe was approached.”

So we still have hope. But like he said, nothing has been confirmed yet. I will tell you guys as long as I get any updated info.

Last week I asked the rep manager of Seancody to confirm this news. He told me Brandon was filming a new scene, but only the director knows what they were filming. I really hope Brandon will push his limits this time. Keep fingers crossed. I will let you know as long as I have any news. Stay tuned!

[Updated on Oct 26th, 2015] Abe, Marsall or Parker, one of these hot stars will make a comeback this Saturday (Oct 31st, 2015). And a super hot solo model will be back shooting the sex scene. I am not allowed to tell you more details for now. So just be patient.

[Updated on Nov 05th, 2015] A super hot solo model will be back this Saturday (Nov 07th, 2015) for his first gay sex scene. I already mentioned his name in my previous update. 😀 A lot of fans think he is the kind of solo only guy. But you are wrong. I can not wait to see his first interaction with a guy.

[Updated on Nov 20th, 2015] Can you believe that? Fans-favorite Seancody model Brandon finally gets fucked for the first time on camera. Brandon’s bottoming debut will be released on Nov 28th, 2015 (coming Saturday).

[Updated on Jan 27th, 2016] It’s a big surprise that hot hung Jess will come back on this Saturday! Although Jess did a solo at All-americanheroes (Check my post: Tony Jerks Off), Seancody still let him back. So you know how popular Jess is.

Jess is one of my favorite Seancody models. He is very cute with a lean fit body and a beautiful big cock. Jess is an aggressive power top. I hope he can stay longer this time.

Shaw’s bottoming debut will be released on this Saturday (Apr 1st, 2016), so I doubt if it is an April fool joke. Now I can tell you it’s a real scene after I confirmed it with an insider. Shaw getting fucked is definitely the hottest bottoming debut so far this year.

[Updated on May 03rd, 2016] Hot muscle jock Chase will come back after being away for more than 2 years. Chase is a super hot Seancody model I am attracted to (Check my post: Bottoming Up Wish List in 2014).

Chase’s new scene will be released on May 05th, 2016 (this Thursday). I hope Seancody can convince Chase to bottom up this time. Fingers crossed.

[Updated on May 26th, 2016] Fans-favorite Brandon will get fucked again to celebrate his 5th Anniversary at Seancody. I hope Brandon will do a full bottoming scene this time. This scene will be released on May 28th, 2016 (this Saturday).

[Updated on Dec 12th, 2016] Hot new muscle hunk Arnie will be back for a duo scene in which he is paired with Dean. Looks like Arnie will top Dean or flip-fuck Dean in his first gay sex scene. Can’t wait. 😀

[Updated on Dec 21th, 2016] Handsome muscle jock Nixon will get his cherry popped up on Dec 24th, 2016 (this Saturday). Can’t wait to see Nixon take a hard raw cock up his tight virgin ass like a pro!

[Updated on Jun 1st, 2017] Seancody will release a Puerto Rico Getaway series. Long time power top Brysen will make his bottoming debut in this series. Can not wait to see Brysen take a hard raw cock up his tight bubble ass like a champ.

Watch The Full Video – More Than 2000 Hot Scenes at Seancody

Watch The Full Video – More Than 2000 Hot Scenes at Seancody