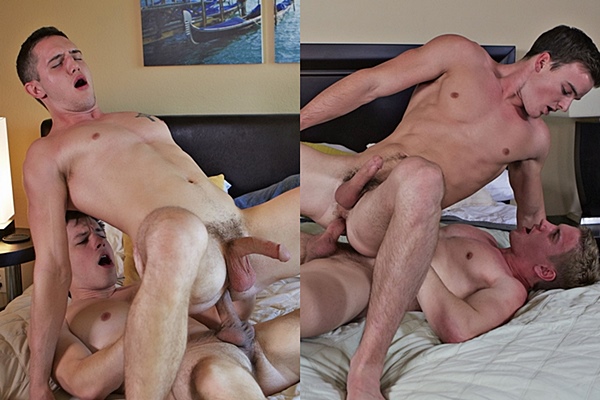 Today I bring you two hot bottoming debut at Corbinfisher. Kent breeds Taylor’s tight virgin hole and Kennedy gets his cherry popped up by Kellan. Which bottoming debut turns you on most?

Fans have been waiting Taylor’s bottoming debut for a while. Finally Taylor gives up his hot virgin ass and big-dicked Kent is the right person to break in Taylor.

Taylor uploads his hot wad first. Kent pulls out, shooting his big load all over Taylor’s ass. Then he re-inserts his stiff pole into Taylor, breeding his pink hole with his remaining drops. With the look on his face, you know Taylor enjoys his first time bottoming.

It’s exciting to see hot college dude Kennedy bottom for the very first time. Kennedy has a hot body with great face, and he is energetic through the fucking session. Kellan is happy to be the first man breaking in Kennedy’s tight virgin ass.

Kellan fucks Kennedy in missionary, doggy and cowboy. Kennedy blows a big load with Kellan inside him. Then he feeds Kellan with his juicy load. Kellan jerks himself off, shooting a huge load all over his body. Kennedy licks off every drop before he delievers Kellan a hot cummy kiss.