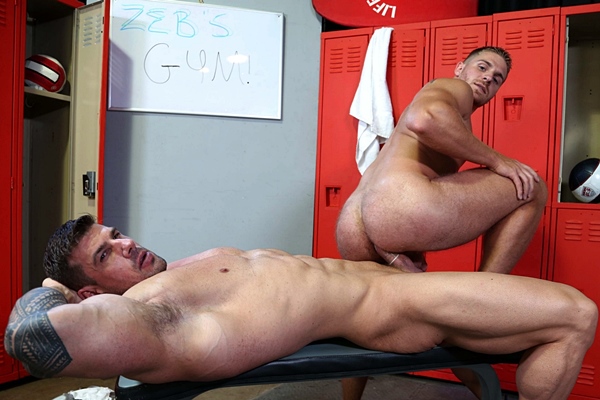 Handsome Logan is excited to have sex with Zeb. He worships Zeb’s entire body as he flexes and poses. From the biceps, triceps and lats, Logan lets his hands and tongue explore the huge body of Zeb. Soon Logan tongues Zeb’s muscle hole before he sucks Zeb’s big cock with passion.

Zeb tells Logan to bend over as he drives his hard cock deep inside Logan’s hairy ass. He pounds Logan doggy, reverse cowboy and doggy again. The reverse fucking is very pleased to eyes. Logan rides Zeb’s fat cock, bouncing up and down like a slut.

Logan quickly follows, dumping his milky load onto the locker room bench. Then the two head to the shower where Logan continues to worship Zeb’s massive body as he washes him off.