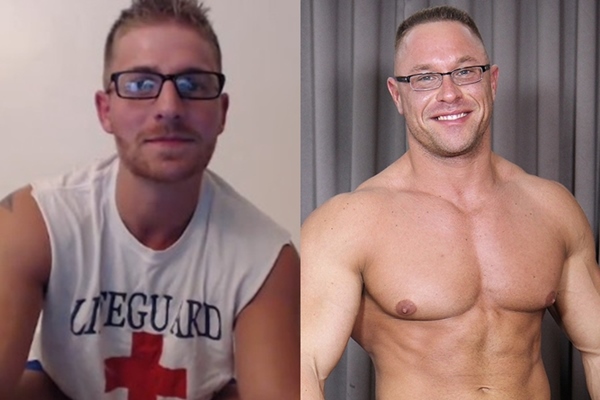 As long as you are hot, glasses make you look sexy from another perspective. Today I bring you two hot guys with glasses – Logan Vaughn and Big Daddy John. Watch these jocks wank off with glasses on.

I know lots of guys don’t like short-sighted glasses because they think they look not manly enough with glasses on (except sunglasses). But I find some guys with glasses are so appealing.

Logan Vaughn made his debut show at GayHoopla. Even being a pro for years, Logan knows how to learn the new format. His new haircut and glasses look so good. Logan is the one who knows how to show off his hot body to please the camera.

Big Daddy John, aka Brock Vinson, is a married bodybuilder who has a wife and kids. But he also has some secrets his family does not know. John likes “nice men” and likes to get his hot bubble butt fucked occasionally.

John is a bit nervous being on camera. He takes a break for the night and returns the next day to perform like a champ. John gets naked and flexes his muscles to shows off his hard workout. Then he gets on all fours, revealing his tight muscle hole.

John then lays on his hack to jack off with glasses on. John moans loudly as he shoots a big thick load, landing onto his hard abs. John heads to shower to rinse his sexy body and finally takes off his glasses. He looks equally hot with or without glasses on.