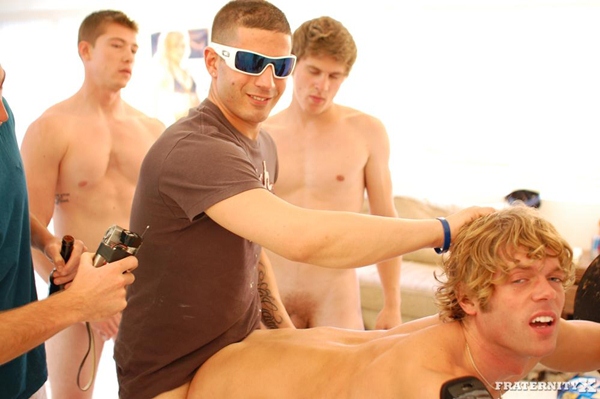 Three dudes walk over to the benchpress and grab Morgan. They take their shorts off and pull out their hardon. Morgan tries to escape. They hold his head against the weight bar so Morgan has nowhere to go.

They take turns slamming Morgan doggy. The hard pumping they bring tests Morgan’s limits. Morgan replies with moans and groans. His butt hole has never been stretched that much, but Morgan doesn’t ask for mercy. With the look on Morgan’s face you know he is suffering from big pain of take a big raw cock up his tight hole.

Then they picked Morgan up and carry him to the kitchen counter. This cute blond bitch is gonna be their best breakfast. They keep gangbanging Morgan for a while before they are close to orgasm.

I like the guy in brown t-shirt with blue sunglasses. He is the same guy in another hot scene (Check my post: Will & Andy Barebacks Grant in Fuck Classes). I still wait to see this hot cocky fucker gets his cherry popped up.