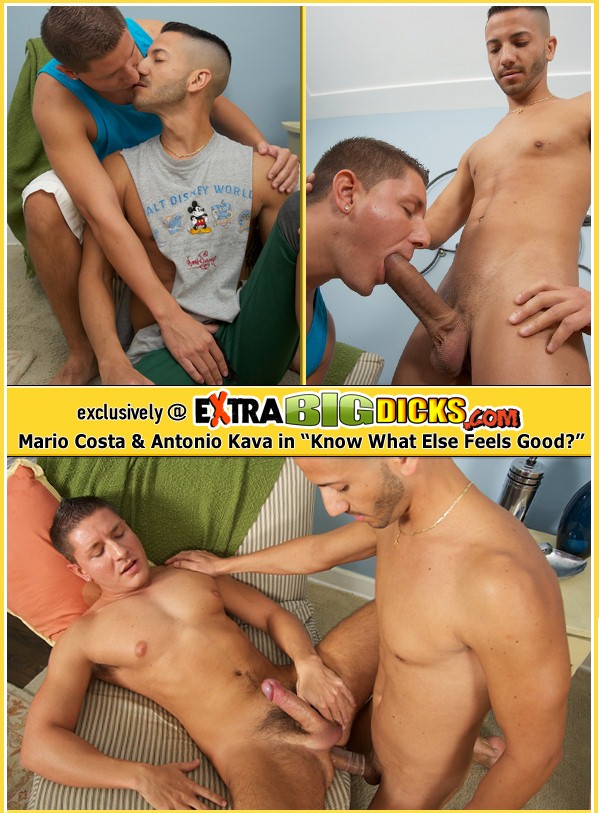 We know our members on ExtraBigDicks.com aren’t really size queens; they just like to be impressed. Well this week “impressive” is definitely one word that’s been used to describe the fat, uncut cock that fan-favorite Mario Costa keeps in his shorts. Joining him this week is new comer to the site Antonio Kava! ario is a bit sore and Antonio is giving him a nice back rub…

“That feels really good” Mario moans as Antonio takes it one step further. He slides his hand down Mario’s chest right onto his crotch and says “this would feel even better-inside me” You don’t have to tell Mario twice as he stands up to give Antonio access to his growing meat. Antonio buries his face into Mario’s crotch as he feels that Cuban python come to life.

He holds back as long as he can before lust gives in and he hauls out that dick for a better view. He opens as wide as he can before sliding that massive meat down his throat. He takes his time sucking and lapping at that cock and smooth balls wanti ng to pleasure it as best he can. Mario then bends Antonio over on the chaise and kneels behind him to get a taste of that ass.

He slips his tongue inside as Antonio bucks that ass back on it. He eats that ass out wanting to get it nice and wet for what he’s got in store. Once that hole is ready for more, Mario stands up and gets in position. He slaps his bare cock on that hole making Antonio all but beg for it. He then suits up and pushes his fat knob against that sweet hole. It gives in without much of a struggle as Mario sinks his thick 9″ dick deep inside him.