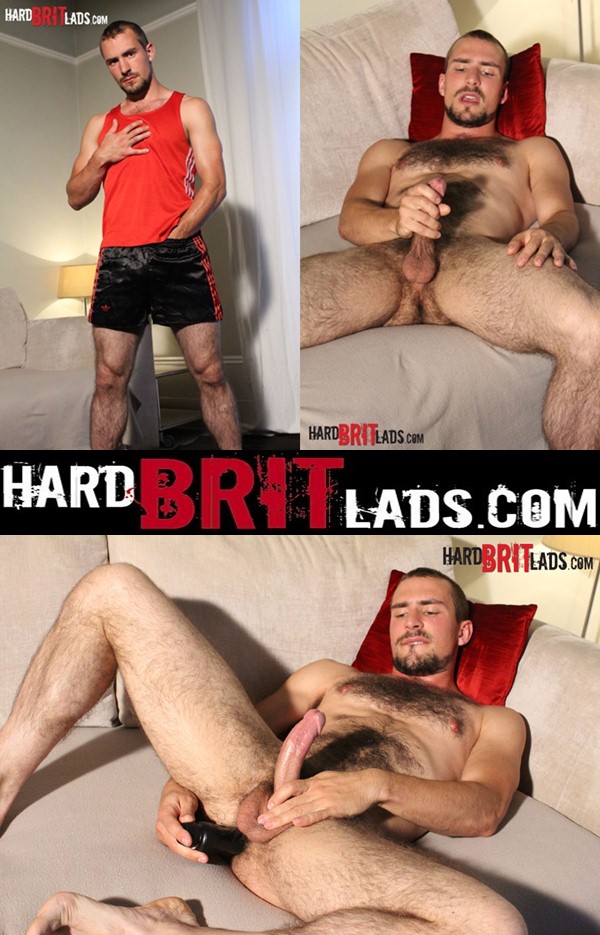 We start off with an interview. Wearing sports kit, Guy sits back with his muscled and very hairy legs wide apart, giving you a cheeky glimpse of his underwear through the leg of his shorts.. He was born in USA to British parents and has lived here for about ten years, but still has a bit of an American accent. He talks about all the sport he does.. He does ALOT. Guy is incredibly fit. Interestingly, he talks about his sexuality, which is pretty open. He prefers women but is very open minded.

The solo starts with Guy standing, he rubs the bulge in his shorts, then takes off his sports vest to reveal his hairy and well toned chest. He plays with his nipples, rubs his crotch, then pours a little oil over his chest and rubs it in. Then he rubs oil into his legs.. for those of you who like legs, the solo is worth it for this bit alone, as Guy has probably the sexiest legs I have ever seen. Nicely oiled up, he goes back to rubbing his bulge, then pulls down his shorts.

He wears a red jock strap, and looks SO fit in it. He turns to show us his perfect and very sexy arse, and rubs and squeezes his butt cheeks, pulling them apart and showing us his hole. Guy takes off his jock, and his cock is semi hard, and pubes are totally natural and quite busy. He plays with it a little, getting it harder, then moves over to the sofa. As he plays with his cock it gets rock solid, and he holds it up for us, giving us some great shots of it. Jerking off slowly now, Guy starts to rub his hole.