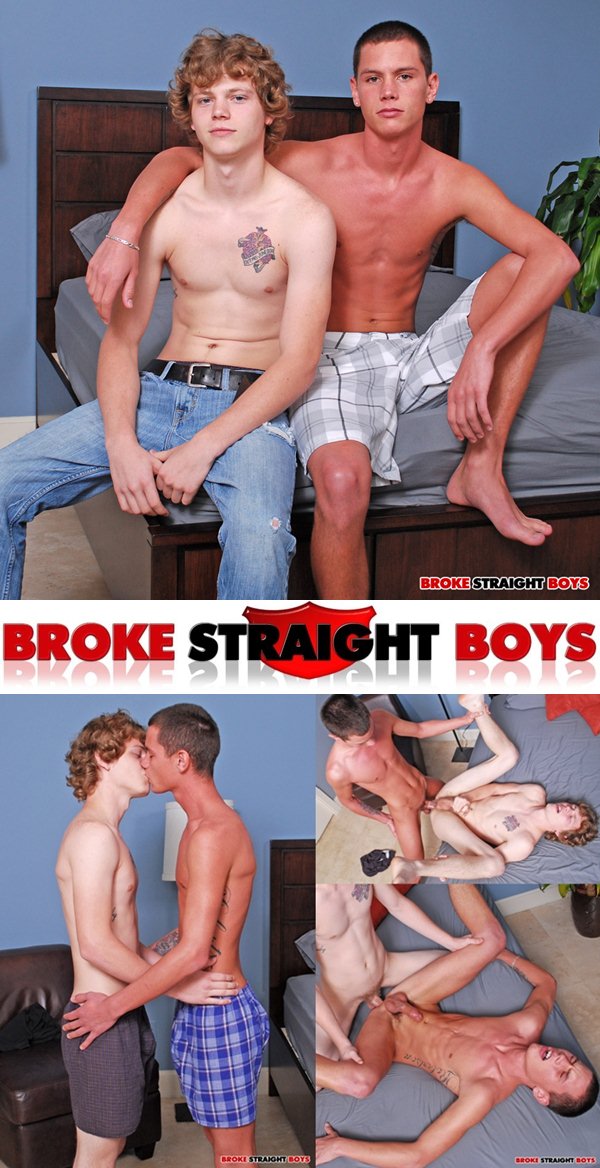 When this weekend’s vid starts, Carter Blane and Max Flint are stretched out on the bed. We get a peek of Max’s pale tummy, and BSB feet fans will love how he dangles those toes. We know you lovers of the tootsies are out there! Carter looks just as scrumptious, his head propped up by some pillows.The cameraman describes the pair as “ass virgins.” Both have had the pleasure of taking a dude doggie style, but neither has been a catcher…

“So I thought we would try getting both of your cherries pipped on camera with each other,” the cameraman notes. Neither performer looks comfortable with the set up, and want to just get it over with. However, those cute ass grins imply they are, at the very least,curious about the popping of cherries. The boys strip to their undies and begin with some tentative kissing (always a plus here in the land of BSB).

Unfortunately the pecking isn’t passionate (tons of spit sharing), but something must be working. Both are popping nice sized tents in their boxers. Carter sits down, and Max starts blowing. Carter’s tool isn’t for newbies because it’s too big. Ever since his first appearance with us, Max has worked on his sucking skills. So much so, that it’s hard to think of another model who is his peer in pole affection skills.

He doesn’t deep throat, but everything is kept juicy should. Also he never forgets to swirl his soft tongue on the head. “Oh fuck, yeah,” Carter moans. Max pulls up and gives his partner a kiss to show him how his cob tastes. Carter gets on his knees to return the favor. Max’s meat sticks straight out and Carter deep throats it. He looks so sexy looking up at the curly topped hottie as he blows away.

When Max face fucks Carter there are times when the tanned boy needs to pull away because there’s too much sausage in his mouth. He doesn’t mind the extra dick because his shaft is as stiff as a board. It’s time to have virginities tossed aside. Max will be first to feel a man inside of him. ‘You ready for this dick,’ Carter inquires. ‘I hope so,’ Max retorts. He puts his legs in the air. Max’s kissable meter hits code red the moment Carter gets inside him.

Before our top can even get balls deep he announces how tight Carter is. “God, it’s big,” Carter whimpers. What do big tools do? Push that prostate consistently and constantly. “Fuck that asshole,” Max pleads. Carter does so, alternating between fast and slow strokes. He even hand jerks his bottom, but is there a need to? Max stays rock hard during his virginity loss. Before Carter pulls out, he gives Max a romantic kiss.

It’s Carter turn to put his legs in the air. “Oh, fuck. You are so tight,” Max announces as he pushes in for entry. Carter grimaces as his top fills him up. It might be painful, but he makes no verbal requests for mercy. He places his hand on Max’s thigh as if to slow down the fucking. The occasional moan, with expletives, escapes his mouth.