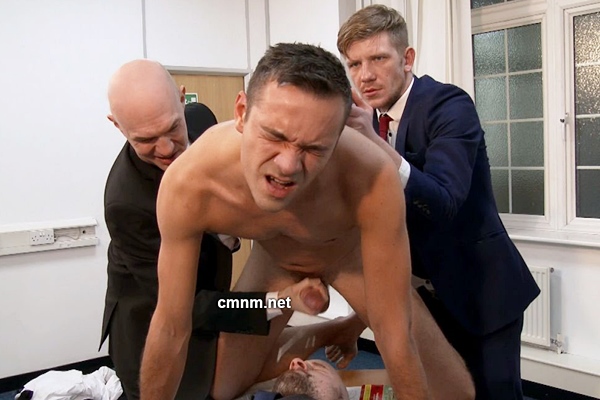 In this master slave theme, businessman Drew Du Plessis and his bodyguard Branislav get humiliated and dominated by creepy Adrian and his cohort Derek. Watch Branislav get finger fucked and jerked until he blows his load on his boss’ face.

You may have seen Drew’s scenes at Breederfuckers. In this episode, he acts as Branislav’s boss. Branislav is a hot Russian straight dude with his macho look, lean fit body, uncut cock and a tight bubble butt.

Adrian and Derek control Drew and Branislav with guns. Derek strips Branislav bare and plays with Branislav’s crotch bulge before finger fucks Branislav’s tight virgin hole. Then they have reluctant Drew finger his bodyguard as well.

Moments later, two evil masters have Drew get on his back while Branislav gets on all fours above his boss. Drew can only stare in horror while his bodyguard’s cock is wanked directly over his face until he gets his face covered by Branislav’s sperm.