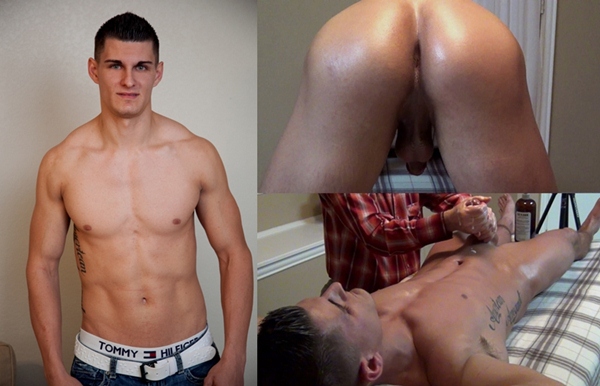 Erik is from deep in the heart of Texas. He is a tall guy with a muscular build and a fat cut cock. Erik is pretty shy on camera. But he loves to show off his hard work at the gym. Erik teases us with some sexy posing and flexing after he takes his clothes off.

Erik lays face down on a massage bed and lets a pair of old hands do what ever they want to his body.  Our masseur oils up Erik’s hot proportional body from shoulder to toe. Erik then gets on all fours and gives us a clear view of his tight pink hole. Our massage therapist rubs Erik’s round ass before strokes Erik’s fat meat underneath.

Erik lays face up and the masseur starts to work on his frontal naked body. He oils up Erik’s muscular chest, arms and sexy abs before he move down to Erik’s beautiful cock. Our masseur gently touches Erik’s mushroom head, rubs his fresh hole and strokes his dick at the same time. Erik’s cock jumps up in no time.

Erik’s handsome face reminds me of Landon Conrad. They look like twins. His tight virgin hole looks so yummy. I hope his cherry gets popped up someday. 😀

Southernstrokes – Handsome Southern Stud Erik Gets Jerked off by a Masseur was last modified: September 3rd, 2019 by mensparkle