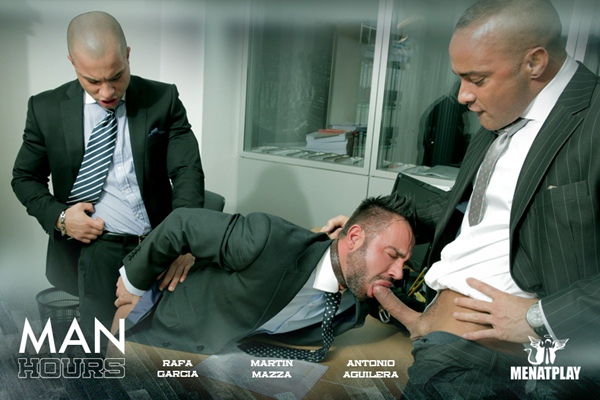 Martin is a cocky boss who offers Rafa and Antonio jobs but with no pay. The two of course get pissed off, so they’re gonna teach this arrogant boss a lesson.

They rush in Martin’s office and rip Matin’s pants off in no time. Martin is forced to get on all fours. Rafa holds Martin’s neck and fucks his mouth aggressively while Antonio mounts Martin from behind. Martin can only gag and moan as the dicks thrust his ass and his mouth.

Antonio then grabs Martin’s hair and forces him to deep-throat his big dick. Rafa’s 10 inch monster cock needs attention too. So they get Martin on his back and take turns fucking Martin’s face.

They hold Martin’s neck tight so Martin can not escape even if he almost gets choked by two big cocks. They switch up the position. Rafa slams Martin’s muscle ass missionary while Antonio fucks Martin’s face.

Rafa pounds Martin deeper and deeper until he fucks a thick load out of Martin. Then the two straight studs stroke their own cocks, shooting two huge loads right onto Martin’s bearded face and open mouth. Now we know who is the real boss.