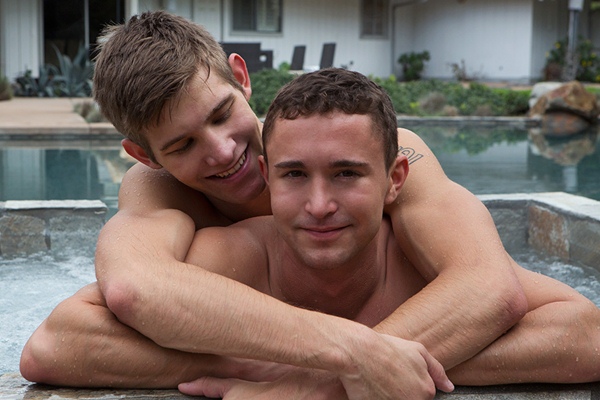 Handsome Brooks is a not a big guy, but he does have a monster cock every bottom dreams of. Even our power bottom Ryan gets shocked as he saw Brooks’ oversized dick. He admits that’s the biggest one he’s ever seen and he can’t wait to ride Brooks’ thick meat.

The two mess around at the pool in a rainy and mistry aferternoon before they head back to bedroom. They start making-out with some hot french kisses. Ryan takes Brooks’ pants off and sucks that beautiful fat cock. He then holds Brooks’ legs in the air and rims Brooks’ tight pink hole.

Brooks lays on his back and Ryan tries to sits on that monster. It takes time for Ryan to get used to Brooks’ big shaft. Once Ryan feels comfortable, Brooks starts pounding Ryan fast and deep.

Brooks then gets Ryan on his back and fucks Ryan deep in the ass missionary. He pumps Ryan like a jackrabbit, which makes Ryan yelp in pain and pleasure. The feel of Ryan’s tight ass engulfing his thick cock sends Brooks over the cliff of desire.

The two share a hot cummy kiss before they move on to second round. Brooks gets on his back and fucks Ryan reverse cowgirl. Nothing is hotter than watching Brooks’ fat raw dick in and out of Ryan’s bubble butt hard and deep.

Brooks squeezes his thick, long meat completely into Ryan’s ass on every thrusting. The camera captures a nice angle of deep penetration with Ryan’s sexy look in one frame. It’s the best reverse cowgirl style I’ve ever seen.