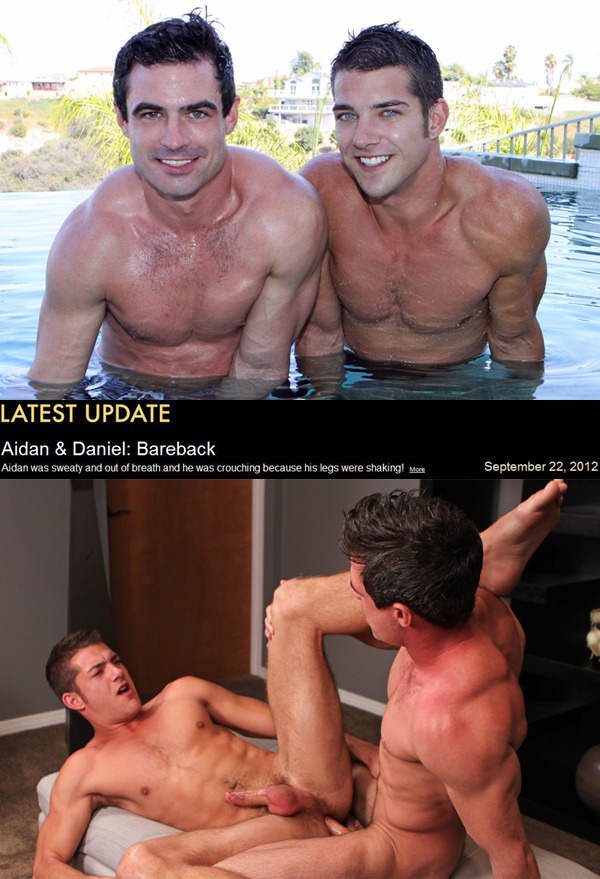 New comer Daniel barebacks cute Aiden. Daniel looks so sexy in his first hardcore, way much better than his solo and oral scenes. Even with a little bit grey hair, Daniel is a very handsome guy with a masculine look. Daniel is also a good kisser and cock sucker. It’s not easy for a straight guy, right? Daniel and Aiden have a passionate making-out before they move on to the real hardcore. Daniel loves rough sex and dirty talk, which makes Aiden turned on easily. Daniel fucks Aiden in several positions and really pounds the shit out of Aiden. Even after just cumming, Aiden gets hard again! 😀

Daniel is proof that first impressions aren’t always accurate. When I first met him, I thought he looked like a salt-and-pepper executive who did a little bit of modeling on the side. After I got to know him, though, I realized that he’s a dirty boy who likes rough sex with lots of dirty talk. Aidan has mentioned several times that he likes it rough as well. I’m not sure if he knew what he was in for with Daniel, though!

“It looks rough!” “It is a little rough,” he replied with a big smile. “It’s pretty crazy!” “Do you like it?” “I do like it. I like aggressive, hard, rough sex!” “Well, he is aggressive!” “He is pretty aggressive and he talks dirty,” Aidan laughed. “He’s pulled some things I wasn’t really expecting!”